Zmodo is a proud sponsor of the China Pop art exhibition going on at the Pacific Heritage Museum in downtown San Francisco through March 31st. If you're in the area, stop by and check it out! The two artists featured, Xue Song and Wei Guangqing, have some very impressive and original works. 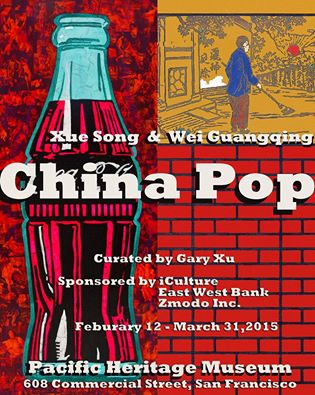 Xue Song began his initial experiments with collage after being inspired by an encounter with works by Robert Rauschenberg. Still, he struggled to find his artistic voice, explaining, “I wanted to break Chinese tradition and surpass western modernism. It is easy to say, but very difficult to realize.” In a twist of fate, his Pop art-meets-classical style began to crystallize after a fire burned down his studio, leading Xue to incorporate charred remnants of past work, books, and other belongings. He became known for colorful collages referencing political and popular icons and Chinese and Western art history, with burnt debris serving as a constant reminder of the past. Additionally, he picked up painting and experimented with styles ranging from traditional landscapes to Pop art. Through his series “Conversations with the Masters,” he engaged with the likes of Piet Mondrian, Pablo Picasso, Qi Baishi, and Xu Beihong.

A painter, illustrator, and one-time performance artist, Wei Guangqing figured among the trailblazers of the Chinese contemporary art scene in the 1980s as a prominent member of the ’85 New Wave movement. His “Red Wall” series exemplifies the Political Pop art for which he is known. Appropriating illustrated editions of feudal-era morality tales, Wei replaces the text with an illustration of a red-brick wall, symbolizing a new social order and collective moral compass. “The works adopt a conceptual approach to record some remnants of heroic illusion amongst a fully materialized society,” he says, “and at the same time tell us that in this era of abundant hedonism and consumerism, people must retain an awe toward unknown objects.”

Zmodo uses cookies and other similar technologies to improve your experience on our site, to measure site performance, and to display offers and ads. By continuing to use our site, or by clicking Accept, you consent to the practices described in our Privacy Policy and Terms of Service.
Accept